In advance of their imminent launch in the UK, we take a look at this exciting franchise model and find out how Cartridge Green has become a market leader in only four years…

According to Cartridge Green’s Director of Franchising Nik Healy, “The Cartridge Green business model was developed, tested and perfected in Ireland for the roll out in the UK. In only four years our business has achieved significant double digit, year-on-year growth against the backdrop of the worst ever economic crisis.” Healy added, “The potential for the Cartridge Green franchise model in the UK is huge, particularly when you consider the much higher population densities and lower levels of competition in comparison to Ireland.”

Cartridge Green are now looking for entrepreneurs to emulate their success in Ireland and develop the brand into the number one franchised supplier of printer cartridges in the UK. 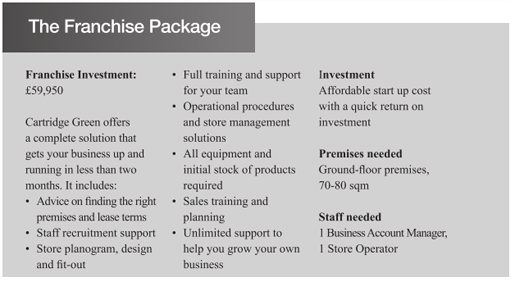 5 reasons you should consider a franchise with Cartridge Green :

Founded in 2007, Cartridge Green is Ireland’s leading provider of home and small business money saving print solutions. We offer a range of printer solutions for home or business users and these solutions come with the benefit of money saving packages for the printer cartridges.
Facebook-f